Under 85 Club Cup to continue without Auckland based teams

New Zealand Rugby (NZR) has confirmed the departure of the Auckland-based teams from this year’s NZ Barbarians Under 85 Club Cup.

The difficult decision was made in consultation with all remaining sides following the Government’s latest Alert Level announcement, with all Auckland-based teams agreeing to bow out of the revered weight-restricted competition due to the increasing uncertainty brought by COVID-19.

Head of Participation Development and Under 85 Club Cup Competition Manager, Mike Hester, said it was a great shame to see the competition impacted in this way and acknowledged the disappointment of the Auckland teams.

“We worked through various scenarios to ensure all remaining teams could compete, but sadly in the end there was no viable way we could see the impacted teams re-joining the competition. Unfortunately, we’ve had to prematurely farewell some strong contenders, including last year’s finalists the Eden Lizards and Auckland University Squids.

“While it was a tough call to make, I’d like to acknowledge the patience and co-operation of the Auckland region teams, as well as the support of the players who’ve been training in isolation with the hope that they can retake the field. Your efforts haven’t gone unnoticed, and we look forward to seeing you take the field in next year’s Club Cup.”

The third semi-finalist will be determined this weekend, following a battle of North versus South in Dunedin, where the Carisbrook Bush Pigs play the Upper Hutt Real Steel Rams at Logan Park.

Following a postponement due to a change in Alert Levels, NZ Forestry Tukapa are now scheduled to take on Fraser Tech in Hamilton on October 16th, marking the last of the Club Cup’s quarter-final clashes. 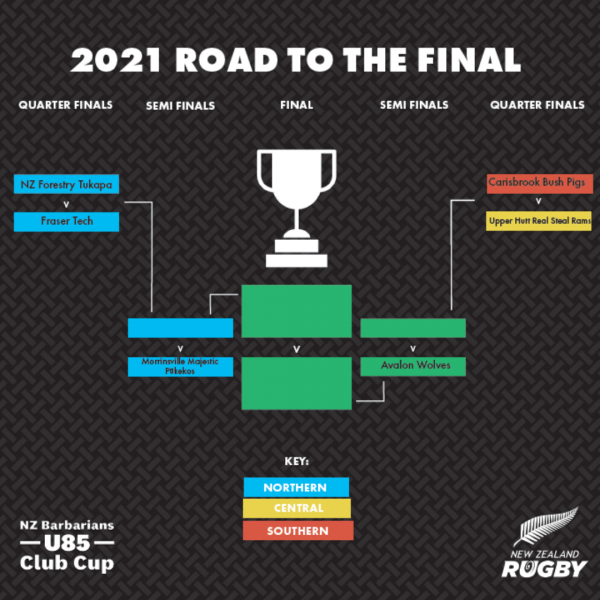 Future of community clubs the focus of new rugby initiative