Our Board is charged with setting strategy, direction and policy for New Zealand Rugby, and is ultimately responsible for the decisions and actions of NZR Management and Staff.

Many of the decisions concerning New Zealand's national teams, domestic competitions, financial management and rugby traditions can only be made by a vote of the Board.

One of the Nominated Board Member positions must be filled by a representative of Māori, and that person is automatically appointed as NZR Representative on the New Zealand Māori Rugby Board.

All Board Members must resign from, and be independent of, any Provincial Union office.

The Chair of the Board is Stewart Mitchell. He has held the Chair since 31 May 2021. 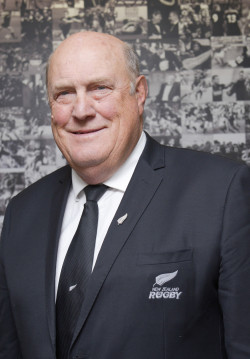 Stewart Mitchell is a former Canterbury Rugby Football Union Chair (2012-14) and board member of the Crusaders (2008 - 2014). Stewart is a qualified accountant and highly experienced strategic and human resource consultant. He has over 20 years' experience in various governance roles and has considerable experience working with Councils and both private and public sector Boards, across a broad range of industries. Stewart played representative rugby in both England and NZ and was a member of the NZ Colts (U21 team 1972 -1973). Stewart joined the Board in 2014. 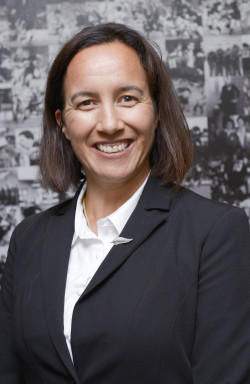 Dr Farah Palmer (ONZM) was elected to the Board in December 2016. The former Black Fern (35 Tests, 1996-2006) captained the team to three consecutive Rugby World Cups, was inducted to the World Rugby Hall of Fame in 2014 and has served on the New Zealand Māori Rugby Board since 2007. Palmer is a senior lecturer in Massey University's School of Management and Director of the University's Māori Business & Leadership Centre (Te Au Rangahau) 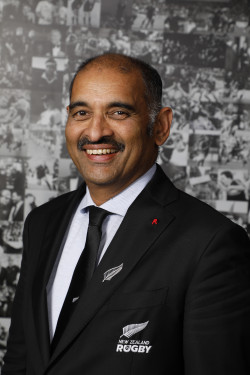 Ajit is a business advisor with more than 20 years of proven commercial success, since leading a management buy-out of transport and contracting company United Carriers. A Northland Rugby Union Board member since 2008 he helped the Provincial Union turn its finances around and was Chair from 2014 to 2020. He has also been an observer on the Board of the Blues Super Rugby club and served as interim CEO. Ajit is a Fellow of the Chartered Accountants of Australia and New Zealand, and member of the Chartered Institute of Management Accountants with industry accounting experience stretching back more than 30 years. A member of the Institute of Directors he is currently on the Boards of property and quarrying business United Infrastructure Ltd and the Alzheimer's Society of Northland. 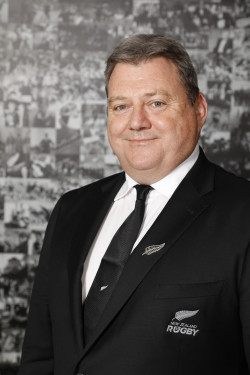 Bart Campbell is a sports marketing professional with extensive experience over 25 years across the UK, North America and Australasia. Over 17 years in London Bart had several leadership roles as Executive Chair, Group CEO and Group COO at sports marketing agencies including TLA Worldwide, Chime Group plc's CSM and Essentially Group plc. In 2019 he started a boutique events agency, Left Field Live, working with blue chip rights holders to take their content to new markets of strategic importance, with a focus on Asia Pacific and North America. Bart moved from London to Melbourne in 2013 and was a shareholder and Chair of the NRL club Melbourne Storm and Super Netball team Sunshine Coast Lightning until May 2020. Bart has been a member of the NZR Board since 2020, served as a NZR representative on World Rugby Council and an elected member of the World Rugby EXCO board. From August 2020 Bart has been a director of Rugby World Cup Limited, the arm of World Rugby tasked with commercialisation and delivery of Rugby World Cups. 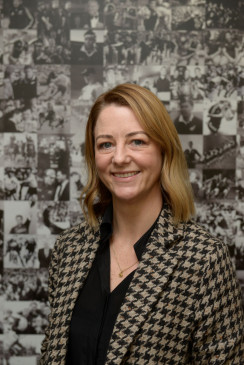 Rowena Davenport joined Gallaway Cook Allan in 2021 as Chief Executive to provide leadership and support to the firm and its partners. Rowena holds a Bachelor of Commerce from the University of Otago and has a background in finance and strategy. Prior to joining Gallaway Cook Allan she was part of the Executive Team at MTF Finance, with responsibilities that included funding, risk management, and leading strategy development and execution. Her ability to think strategically, with a focus on people and culture, saw her get involved in governance, joining the Board of the Otago Rugby Football Union (ORFU) in 2014. In 2019 she was appointed Chair of the ORFU Board, the first female Chair of a major Provincial Rugby Union in New Zealand. Rowena has also served as a member of the New Zealand Secondary School Rugby Strategic Advisory Group and interned on the Board of Dunedin City Holding Limited in 2018. In recognition of her role and contribution to rugby governance, on International Women's Day 2022, she was awarded a World Rugby Executive Leadership Scholarship. Rowena believes that a high performing organisation comes from having a clear strategy, with effective leadership that supports collaboration, and is focussed on delivering value to the organisation and its stakeholders. 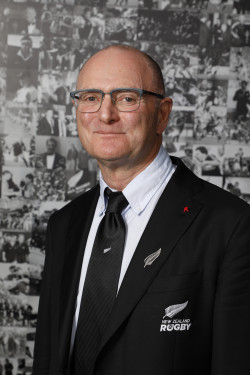 Mark Hutton has 25 years of international finance and private equity investment experience including being a founding Director of Evergreen Partners and Direct Capital, New Zealand's leading private company investor. A Chartered Member of the Institute of Directors, Mark also holds a governance role with agri-business company Scales Corporation, where he is the Chair of the Remuneration and Governance Committee. He was also on NZR's Appointments and Remuneration Committee in 2011. His extensive CV includes appointments as a non-executive director for twenty operating companies since 1994, while he has acted as Promoter for four NZX Initial Public Offerings. Educated at the University of Canterbury, Mark's passion for rugby includes two three-year stints on the Board of College Rifles Rugby Football Club in Auckland.

Bailey Mackey was elected to the New Zealand Rugby Board at the 2020 Annual General Meeting. Mackey is also the Founder and CEO of Pango Productions – a privately owned film and television company, as well as the founder of tech startup and online production management tool KAHA. Mackey is the representative for the Creative sector on the Prime Minister's Business Advisory Council. In 2017, he was named Māori Entrepreneur of the Year. 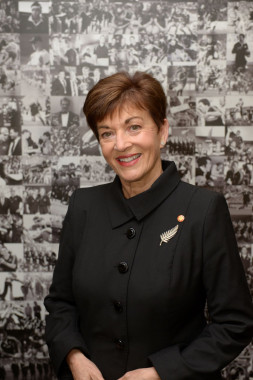 Former Governor-General The Rt Hon Dame Patsy Reddy has had extensive experience in governance and consulting roles in both the private and public sector. Dame Patsy has served as a non-executive director of Telecom Corporation, Sky City Entertainment Group, Air New Zealand, New Zealand Post and Payments NZ Ltd. She also served as Chair of the New Zealand Film Commission, Deputy Chair of New Zealand Transport Agency, and Chair of Education Payroll Ltd. Her extensive CV includes major consulting roles as Independent Reviewer of Intelligence and Security in New Zealand and Independent Facilitator of the Joint Working Group on Pay Equity among others and she was a Chief Crown Negotiator for Treaty Settlements. Dame Patsy has also had significant involvement in governance of creative and charitable organisations, including as Trustee of the New Zealand International Festival of the Arts, the Victoria University Foundation, the Victoria University Art Collection Trust, the Spark Art Trust, the Wellington Jazz Festival Trust, and Sky City Community Trust. She was a founding Trustee and advisory board member for New Zealand Global Women and has chaired the Board of the New Zealand Film Archive. She is currently a Trustee of the NZ Symphony Orchestra Foundation and the Aspen Institute New Zealand. In 2014 she became a Dame Companion of the New Zealand Order of Merit for services to the arts and business and was made a Grand Companion of the Order and received the Queens Service Order (QSO) in 2016. Educated at Victoria University of Wellington with an LLM (First Class Honours).

These positions are elected for two year terms. In 2022, Max Spence became President while Matthew Cooper was elected Vice President.

After graduating from Lincoln College (now University) in 1976 Max Spence has committed his professional career to the agricultural and horticultural sectors. In May 2019 he completed 35 years’ service with Fruitfed Supplies, a part of PGG Wrightson. He stepped down as the National Manager of Fruitfed Supplies in June 2019. He was Chair of the Nelson Bays Rugby Union from 1996 to 2005, Chair of the Tasman Rugby Union for the period 2006 to 2008 and was on the Board of Crusaders Franchise Ltd from 1999 to 2010. He is a life member of the Nelson Bays Sub Union and in 2013 became the first Life Member of the Tasman Rugby Union.

Matthew Cooper has been Chief Executive of Sport Waikato since 2001, where he has led the organisation’s key strategic projects focused on increasing participation in play, active recreation and sport. He is a current Trustee with the Halberg Foundation and also a graduate of the University of Waikato.

The New Zealand Rugby Patron fills an honorary role as the figurehead for the organisation. Throughout the 20th Century the Governor General traditionally held the role of Patron. Former All Blacks Captain Sir Brian Lochore was Patron until his passing in August 2019, and Ian Kirkpatrick, was elected as his successor at the NZR Annual General Meeting in 2020. Kirkpatrick was an All Black (# 666) from 1967 to 1977, playing in 38 Test Matches, including nine as Captain between 1972 and 1974. He was made a Member of the British Empire for services to rugby in 1980 and inducted into the World Rugby Hall of Fame in 2003. He is also Patron of his local rugby club in Poverty Bay and remains an active supporter of club and representative rugby.