Eden Park beckons as draw finalised for U85 Club Cup

Eden Park has been confirmed as the venue for the NZ Barbarians U85 Club Cup final and the 32 remaining teams now know their next steps toward weight-restricted glory, after the Rounds 2 and 3 fixtures were determined in Auckland today. 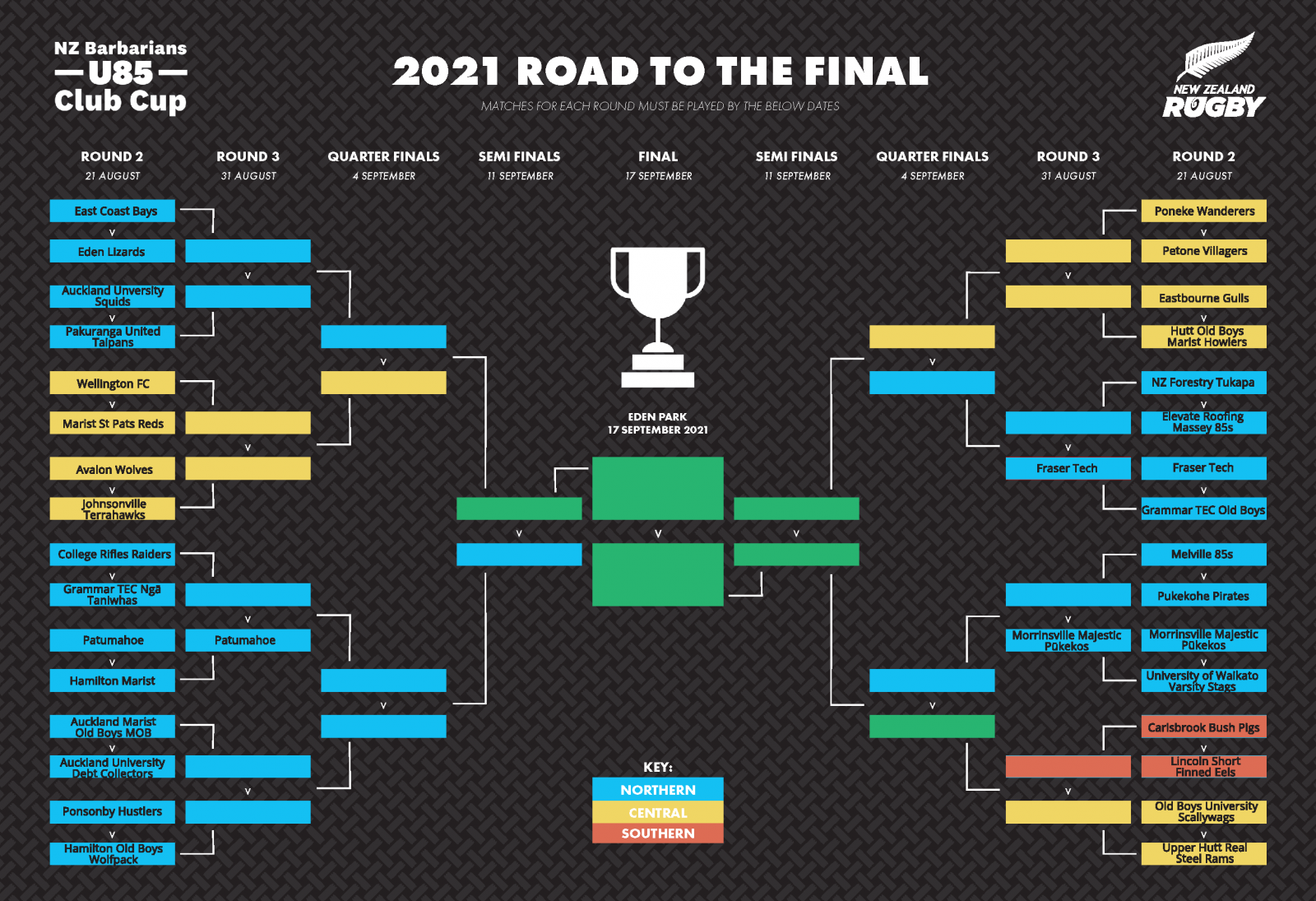 If the two 2020 finalists both win their Round 2 matches, they will meet again in a highly contested Round 3 matchup. The Eden Lizards have arguably the tougher route having to first overcome highly flying East Coast Bays who sit atop of the NHRU competition.

NZR CEO, Mark Robinson said it was fantastic to see this new national initiative gaining in popularity and following.

“It’s great to see this weight-restricted competition building on the success of 2020. We’ve seen some fantastic rugby in the opening round of matches and with Eden Park confirmed as the venue for the final the intensity is sure to rise even further.

All players dream of playing on the hallowed turf of Eden Park and to be able to provide that opportunity to our under 85kg players is huge.

Other feature of today’s draw include Waikato rivals Melville 85s and the Morrinsville Majestic Pūkekos also on a collision course for an inter-Provincial Union clash in Round 3.

Melville plays Pukekohe Pirates in Round 2, while the  Pūkekos have already secured their Round 3 spot, after a default saw them edge closer to the Final.

NZR’s U85 Club Cup Competition Manager, Mike Hester, said that it was great to be able to complete the draw and provide certainty for teams about their path to the final.

“This competition landed really well with players, coaches, and clubs in 2020, and it has grown arms and legs in 2021. To see the entries double from 19 in 2020 to 45 in 2021 with 11 Provincial Unions participating has been really exciting. To be able to bring the final to Eden Park for a second time is also going to provide a fitting venue for a national final.”

45 Teams entered the 2021 competition and were structured into Northern, Central and Southern Conference approach.

Rounds 1 and 2 of the 2021 NZ Barbarians U85 Club Cup were drawn on 16 April 2021 in a Northern, Central and Southern approach. The remaining rounds were drawn in a bracket draw out to a Final.

Quarter Final positions are allocated based on the number of entries from each Conference: Northern - five positions; Central - two positions; and Central/Southern - sharing one position.

Matches for each round must be played by the below dates.

Future of community clubs the focus of new rugby initiative