New Zealand Rugby (NZR) has announced the draw for the 2021 NZ Barbarians Under 85kg National Club Cup, with 45 teams from across 12 Provincial Unions set to compete.

U85 Club Cup Ambassador and Former All Blacks Coach, Sir Graham Henry, was part of the live draw that took part in Auckland, for New Zealand’s fastest growing rugby tournament.

Henry said it was exciting to see the growth the U85 Club Cup has experienced since last year’s inaugural event, and even more so to witness the start of a strong comeback for weight-restricted rugby throughout New Zealand.

“We all know the excitement our professional competitions create, so it’s great to see the buzz the Cup is creating throughout community rugby, and the power it has to bring together teams from as far north as Kumeu, right down to Dunedin.

“The Cup is reinvigorating a grade of rugby that was an unappreciated gem. It’s creating the opportunity for our under 85kg players to compete in a national competition, and to play in some of our top stadiums, that may otherwise not exist.”

Some of the key match ups from today’s draw include a repeat of the tightly contested 2020 Quarter Final between Auckland University’s Squids and Karaka Razzlers from Counties-Manukau. Newcomers Kahukura formed specifically for the tournament from the Bay of Plenty will travel from Rotorua to play East Coast Bays at North Harbour. Champions Eden Lizards, one of several teams with a first round bye, will play the winner of the Kahurangi versus East Coast Bays. 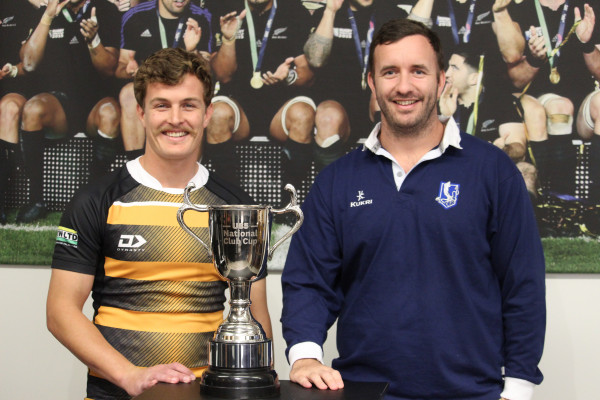 NZ Barbarian RFC President Bernie Allen, who was also in attendance for the draw, said the Barbarians were pleased to be able to support the competition.

“We are really passionate about the amateur game and the opportunities this competition offers to middle-weight rugby players at a national level. We are proud to be part of this and look forward to round one kicking off in the coming months.”

Now in its second year, the weight-restricted national competition is set to be bigger and better than ever, with twice as many teams geared to compete – up from 19 teams across five Provincial Unions in 2020.

While the schedule has yet to be finalised, NZR Participation Development Manager, Mike Hester, said they were looking forward to showcasing these games on a wider platform, including televised curtain raisers to high profile games, providing a fantastic opportunity to shine a spotlight on this re-emerging grade.

“It’s great for those players who live in areas where there isn’t an under 85kg grade to have the opportunity to take the field and represent their club on a national stage.

“We’re really looking forward to this competition getting bigger and better every year.”

You can find the full draw and competition structure here on the NZR website.